The nominees for the Bonsang category were revealed last week, but several groups and artists were not nominated. This led to... 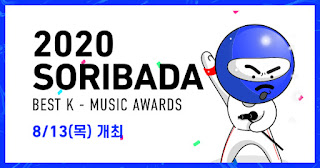 The annual award ceremony Soribada Best K-Music Awards will be taking place on 13th August. It is unclear if there will be live audience for the event taken the current covid situation around the world and in korea.
The nominees for the Bonsang category were revealed last week, but several groups and artists were not nominated. This led to a lot of fans getting disappointed and calling Soribada out for its partial behaviour. Soribada notified that they were aware of issues with the nominee list.
This week, Soribada revealed the fresh list of 100+ nominees with the missing groups added and other issues fixed. The voting starts later this week, so fans must be prepared with the points on the soribada app to vote for their favorites.
The full list and voting details can be found on Soribada's official website.