The first Red Velvet subunit was rumored to have been under the desk since 2019. The debut was initially planned for this June, but... 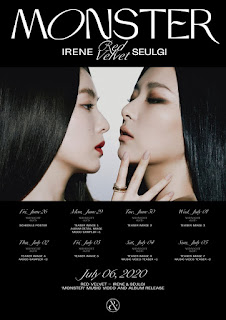 The album scheduler for long awaited debut release of Irene and Seulgi subunit is now out. The first Red Velvet subunit was rumored to have been under the desk since 2019. The debut was initially planned for this June, but postponed for some reason. Read about it below:
Red Velvet Seulrene subunit debut delayed + Teaser
PREORDER MONSTER (#1)
PREORDER MONSTER (#2)
Two Shadows Teaser: 21st June