The release will be a 'special album'. The album is titled 'Starry Night' and it releases on 11th June 2020. 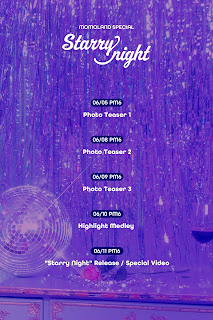 Merries took a sigh of relief as MMLD Entertainment finally confirmed Momoland's rumored summer comeback. The agency had been avoiding questions about the comeback since May.
Also Read: Former Momoland member Yeonwoo participating in 'Idol Fishing League'
The release will be a 'special album', suggesting that it might be a mini-album with not more than 4 new tracks. The album is titled 'Starry Night' and releases on 11th June. The album scheduler has no mention of a music video. There will be Photo Teasers and a 'special video' released on the day of the album's release.
Take a look at the planned timetable and prepare for another summer bop from Momoland. In other news, Momoland recently released a fun music video featuring popular cartoon character Pororo.
Stay tuned for the photo teasers and start collecting points to get the girls some trophies!