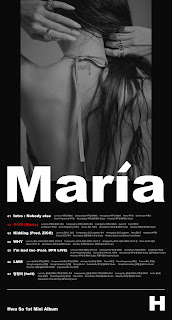 Hwasa's anticipated Mini-Album, 'Maria', is set to release on 29th June. Continuing the tease for her first mini-album, the Mamamoo member dropped the tracklist containing 6 new tracks. The album will also contain her last year's single release 'Twit'. A video for the tracklist is also available on VLIVE.
Tracklist:
Also Read: Hwasa to not participate in Mamamoo's 'KCON:TACT' appearance
The title track, Maria, has been co-written by Hwasa herself. B-Side 'Kidding' is produced by singer-producer Zico. The intro track, Nobody Else, was released last week along with a sorrowful music video.