Weekly's debut album is called 'We Are'. The teasers for 'We Are' start dropping from June 16th with the release of their debut trailer 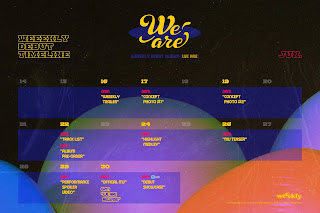 PlayM Entertainment's new girl group, WEEEKLY, has revealed the debut roadmap with a timeline of debut album teasers.
The 7-member girlgroup consists of some og PlayM's best trainees. The members are:
Weekly's debut album is called 'We Are'. The teasers for 'We Are' start dropping from June 16th with the release of their debut trailer.
Watch: Upcoming Girlgroup WEEEKLY's pre-debut reality 'weee:kloud'
The debut trailer will be followed by concept photos dropping on 17th and 19th June. The tracklist will be revealed on 22nd June along with the opening of album Pre-Orders. The highlight medley and M/V + Performance teasers will be revealed in the following week.
Weeekly's anticipated debut album will release on 30th June at 6pm, with the music video for lead single releasing 18 hours earlier at 12am. Are you excited for WEEEKLY's awaited debut?