The video, featuring Umji's honey-like vocals over a collection of self-filmed clips, is now live on GFriend's Official YouTube channel. 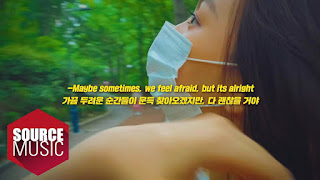 Watch The Video
GFriend's youngest member, Umji, just dropped her cover of 'Put Your Records On' (original by: Corinne Bailey Rae). The video, featuring Umji's sweet vocals over a collection of self-filmed clips, is now live on GFriend's Official YouTube channel.
Also Read: GFriend To Continue Their July Comeback Streak With Upcoming Album
The combination of Umji's warm visuals and her soft voice gives off the perfect summery vibe that the song is known for.
Watch: GFriend's Yuju, Umji and SinB try out 'SuperStar GFriend'
Catch Umji and all of GFriend later this month at the first ever online KCON (aka KCON:TACT). KCON:TACT will be streamed live via YouTube starting 20th June.