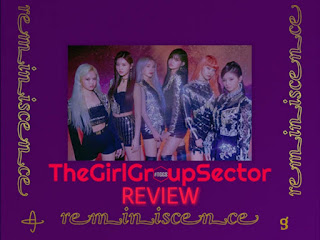 Yuehua's rookie girlgroup Everglow have been making headlines across the globe since their debut. The group released 2 single albums in 2019. They made a comeback with their 1st Mini Album in February this year, titled 'reminiscence'.
Released: 3rd February, 2020
Tracklist:

The cover art features all 6 members dazzling in shiny outfits as they stand surrounded by stars.
The first track is a 'Salute' to all the women in this world. The lyrics carry a women empowerment message as the girls proudly sing the words

Salute to my ladies.
Hey, we will rock the world. Are you ready?

Dun Dun emerges as the highlight of this mini album. With a powerful beat drop and top-notch song structure, this lead track is one for the ages. Everglow once again proved both their vocal and dance expertise through the music video.
Dun Dun is about confidence and embracing your roots. The girls discard all the hate and people who look down upon them.

The third track of 'reminiscence' is 'Player'. Player goes as hard as Dun Dun with a jaw-dropping in-chorus dance segment. The lyrics talk of being unafraid of controlling someone, especially when that someone is a hater. The members' clever assertion of them being the 'Player 1' in a video game and controlling the fate of others highlights the message of the song.

No Lie is the closing track of the ep and carries a fantastic vibe with it. The song is about nostalgia, dreams and memories. The lyrics narrate a story from a fantasy land, a dream world that exists in the mind of the members. The song structure is similar to Everglow's previous release 'Hush' that had a similar dreamy vibe to it.

The dry ground is as cold as a ghost

Overall, Everglow's comeback proved yet again that the global exposure and popularity that the girls are receiving is well deserved. There are no unfilled gaps or holes in this mini album and it covers all genres that the girls have previously shown mastery in. The music video surpassed 70 million views in a little over a week and is now at over 120 million views.
Buy reminiscence