Carnival is the 2nd Mini Album by the MNH girl group that debuted in 2019. In this review I'll share some general reception about the release 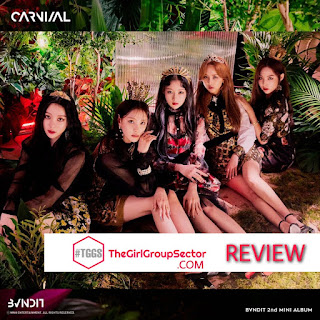 Carnival is the 2nd Mini Album by the MNH girl group that debuted in 2019. In this review I'll share my personal thoughts as well as some general reception about this Ep by BVNDIT.
Released: May 13th, 2020
Track List:
The album art in itself is a step up from the group's previous release 'BE!' from last year, showcasing a more confident side of the members dressed in 'Carnival' themed outfits surrounded by a vibe of a dense 'Jungle'.
As the title suggests, Carnival is a celebration, a celebration of the group completing one year in the industry, a celebration of overcoming the struggles and hard work of being a trainee and finally having developed a little fanbase that stands by them. The intro track Carnival is an instrumental intro, signalling the start of the festival.
WATCH: BVNDIT RESPOND TO FAN COMMENTS IN PORTUGUESE
The lead single, Jungle, is the proud assertion of being 'DIFFERENT' and, as the group's name itself suggests, 'AMBITIOUS' amidst the 'same and fake people that surround you'. The girls confidently claim the title of being the only 'Queen of the Jungle' (or 'Queens', if you will).
Jungle involves an intense chorus and post chorus dance break during the outro, that highlights the group's dance skills as well as their vocal genius.
Come and Get It is another song with lyrics filled with confidence and the will to actually 'come and get' what you want, without hesitation. The members ask you not to question yourself, but go with it without worries, go and GET IT.
WATCH: BVNDIT RELEASE DANCE PRACTICE VERSION OF JUNGLE
The 4th track, titled 'Cool', is about teamwork and having each other's back. BVNDIT also released an official M/V for the song, featurimg the members striding forth for new challenges while proudly saying how they've always got their sisters' backs.
Children, the final track off of Carnival, is a song dedicated by the members to their parents, who have watched them grow. The members address their parents, recalling the times that they held their hands, and how now there is no one to guide them on the path they are on.
BVNDIT also released an animated M/V for 'Children' as a pre-release song for this mini album.
Jungle and Children are my favorite tracks off of this album, with the lyrics and overall song structure being amazingly well done.
Stay tuned for more album reviews.
BUY CARNIVAL HERE