BVNDIT stands for 'Be Ambitious aNd Do IT'. Thus, their first mini album is appropriately titled 'Be!' 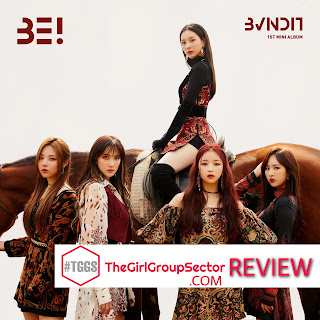 MNH Entertainment, the label home to former IOI member Chungha, debuted their first girlgroup BVNDIT in early 2019. The group's debut song Hocus Pocus turned heads and the M/V hit millions of views in a short span of time, but was it enough to bring sales when the first mini-album released?
Released: 5th November, 2019
Tracklist:
BVNDIT stands for 'Be Ambitious aNd Do IT'. Thus, their first mini album is appropriately titled 'Be!', with lead single 'Dumb' and 5 b-side tracks including an instrumental intro.
READ: [REVIEW] BVNDIT - CARNIVAL [2ND MINI ALBUM]
The album is a perfect blend of ballads with hope and powerful tracks with confidence. 'BE!' is an instrumental intro that marks the starting point for the rookie group's career.
BE! is followed by powerful lead single 'Dumb' that discards the hate and fakeness in people around as the members sing 'Bye Bye Dumb!'. The lead single is accompanied with a music video showcasing powerful visuals and dance expertise of the new girlgroup. Compared to the first single, Hocus Pocus, 'Dumb' falls short in the line of vocal display, as the song has a rather instrumental chorus that relies strongly on the members' post chorus dance break.
WATCH: BVNDIT RELEASE DANCE PRACTICE VERSION OF JUNGLE
FLY is a ballad track along with MY ERROR. Nonetheless, both the songs are polar opposites of each other. FLY carries a message of hope and beautiful dreams filled with your loved ones. 'My Error' is a message of regret after losing someone you loved and blaming yourself for what happened.
'Dramatic' and 'Hocus Pocus' are the highlights of this mini album, with the members' vocals and dancing at their best yet. Both the songs were pre-releases, marked now as Debut singles A and B, with 'Dumb' being the first comeback single.
Hocus Pocus is the group's magical spell on the audience that aims to spread the magic and purpose of BVNDIT across people's minds. With a vocal chorus and apt display of various sides of every member, Hocus Pocus is my favorite track off of the first release of the rookie group.
Read more about BVNDIT here