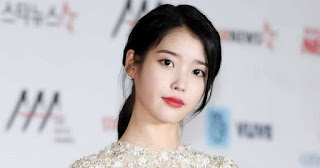 IU was nominated alongside Nu'est and Bol4 on today's episode of Inkigayo.
'eight' (produced by and ft. BTS' Suga) scored 8834 against 5797 and 4601 for Nu'est's "I'm In Trouble" and Bol4's "Hug" respectively, claiming the second win for her single that broke several records and skyrocketed to the top at its release.