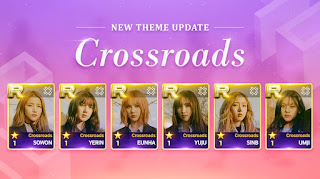 Buddys' first look at SuperStar GFriend's collectible cards is out now. The official account of the game tweeted out a photo featuring the set of Crossroads themed cards.
SuperStar GFriend releases 15th June 2020
In other news, GFriend will be making their 2nd comeback of the year in July. Read more about the girlgroup's upcoming summer comeback and stay tuned for more news.
26th May
GFriend tease upcoming mobile game with first gameplay video

The first gameplay video for SuperStar GFriend is out now. Uploaded on developer Dalcomsoft's official YouTube channel, the video showcases a similar UI and gameplay style as seen in previous SuperStar games.
Click here for the planned release schedule of SuperStar GFriend
Pre-Register now to get over 50K krw worth of rewards when the game releases
Also read about BigHit's acquisition of Pledis Entertainment

IZ*ONE are angelic in teaser for IZONE CHU Season 3