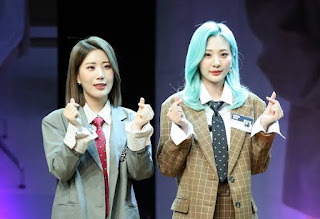 Bolbbalgan4's Ahn Jiyoung recently appeared on MBC's variety show Radio Star. During the discussions, the topic of Jiyoon's departure from the group was brought up.
Jiyoung said she was extremely annoyed at the comments that showed up after Shofar's statement regarding Jiyoon. She talked about rumors and comments that said 'It was imminent' and 'The two were not good friends anyway'. She clarified that it was not like that.

There were many rumors like that. But they did not know the anything. I have known Jiyoon for 10 years and we concluded that it would be the best for both of us.
People said things like "I knew they were not on good terms'". Those words upset me so much.

I hope people would stop having those misunderstandings. "Isn't it because Jiyoon did not receive much spotlight?" "Was she not treated unfairly?". No, Jiyoon is well and having fun. I hope people will support us separately.

The 24 year old is now promoting Bol4 as a soloist. She released her first mini-album as a soloist this month. Read my review of 'Puberty Book 2' in the reviews section of TGGS.
Here is the segment with english subtitles: